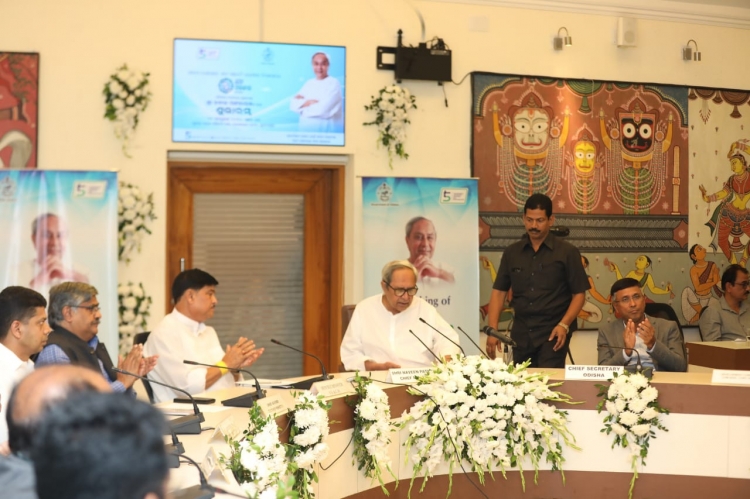 "My Government is a people's government. Nobody could be more important than people themselves. Mo Sarkar initiative demands accountability of the highest order from the public servants." This is what Chief Minister Shri Naveen Patnaik said today at the inclusion of Food Supplies & Consumer Welfare Department under Mo Sarkar at a function at Loka Seva Bhavan.

Congratulating the Department for launching the Mo Sarkar Initiative, the Chief Minister said, "This is one of the most important departments of the State Government that has engaged about 3.30 Crore beneficiaries, nearly 79 percent of the State's population, with food security provisions. Managing work at such a gigantic proportion needs exceptional skills, suitable systems with extensive database, and commitment by the workforce. The effort of the department in this direction is appreciated. Mo Sarkar, as an innovative governance initiative, has caught the imagination of all including policy makers and the general public. It aims at developing a mindset among the public servants that treats the general public with dignity, and is ready to provide service with absolute professionalism. The initiative demands accountability of highest order from the public servants. We are a people's government, and nobody could be more important than people themselves. `Portability' in PDS distribution in Bhubaneswar Municipal Corporation is encouraging. This will empower beneficiaries to have their choice in collecting ration from any shop. It should be replicated gradually in the entire State.

Home delivery of ration to old, infirm, differently-abled, terminally ill and other similar persons is a very benevolent step. Identify more such beneficiaries who are in need of this service and provide ration at their doorsteps. Participation of Women Self Help Groups as retailers in the Public Distribution System should be encouraged to empower women.

Officials on the field must ensure that not a single eligible and deserving person is deprived. At the same time, intensive effort must be put in place to sanitize the database of beneficiaries. All these transformational initiatives will be fruitful if officers deliver public services in a professional manner."