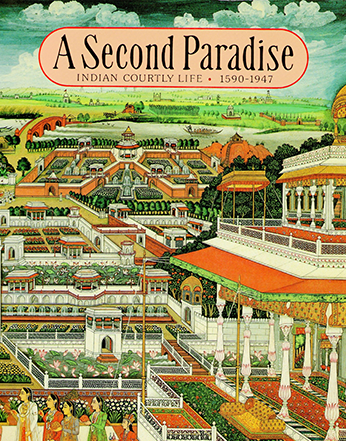 The Indian maharaja holds a special place in the imagination of the West as a creature of exotic fantasy and glamour, He was, in fact, much more than this. As a Hindu he drew his lineage from the very gods and god­desses of India and his parentage from the sun and moon. Later, Muslim con­querors sweeping through India from Central Asia and Afghanistan shunned such idolatry and held mere mor­tals—Tamerlane and Genghis Khan—as the founders of their dynasties. Seduced by India, they accepted titles such as "Shadow of God on Earth" and, with these titles, a reluctant di­vinity. The royal courts mirrored this grandeur by seeking to re-create the universe in microcosm. Every con­ceivable aspect of life was reflected in the court, revolving around the central figure of the king. With the ruler as patron, there flourished great schools of music, poetry, cuisine, philosophy, and painting, taking court life to a peak of subtlety and splendor. By the eighteenth and nineteenth cen­turies all these aspects had reached their apogee in an immense flowering of the arts.

Now, in a magnificent feast for the eyes, A SECOND PARADISE depicts in art and text the days and nights of princely courts from the early Mughal emperors through the legendary rul­ers of the late nineteenth and early twentieth centuries. It goes behind the harem wall to reveal the lives of royal women, the training of a courtesan, the preparation of a princess for the bridal chamber, the use of intoxicants to enhance the madness of passion. It describes the ancient ceremonies that raised a king to divinity and reveals the pageantry of court life through spectacular celebrations.

Lavishly illustrated with exquisite Indian miniatures and photographs-many published for the first time in these pages-and augmented by watercolors created especially for this book by a descendant of court painters, A SECOND PARADISE captures the romance and opulence of royal India: silken tents, sherberts, caskets of jewels, fields of narcissus, cool marble pools, and love pavilions. It is an official book of 1985's yearlong Festival of India, and one readers will treasure for years to come.

Naveen Patnaik, the author, is a member of the board of India's National Historic Trust.

Bannu, the Jaipur watercolor artist, is from the family that has given court painters to the maharajas of Jaipur for 150 years.

Stuart Cary Welch, the world's foremost authority in his field, is Curator of Islamic and Later Indian Painting at the Fogg Art Museum, Harvard, and Special Consultant in charge of the Department of Islamic Art at the Metropolitan Museum of Art.